Eat More Oats! Why Experts Say That Porridge Is ‘The Perfect Healthy Breakfast’ 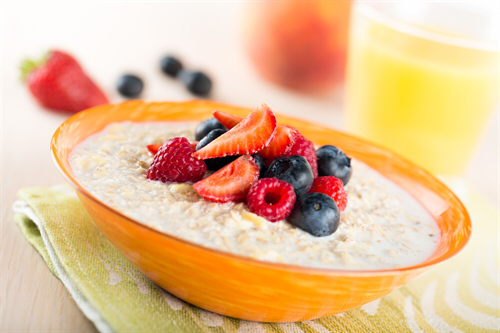 A hearty bowl of porridge is considered a healthy breakfast and the ideal way to start the day. According to health and nutrition experts, ‘if everyone started the day with a bowl of porridge, it would have a significant impact on public health’.

In fact, some experts claim that porridge is the perfect breakfast cereal. Its many health benefits coming from the soluble fibre found in the oats. This fibre known as beta-glucan is found in other grains such as barley and rye, but it’s in high quantities within oats.

Oats May Support Your Immune Health

Beta-glucan can fill you up and give a satisfied feeling by forming a thick gel in the gut. This means it could help you to feel fuller for longer and prevent snacking or overeating.

The main benefit of beta-glucan is that it can feed the healthy bacteria in your gut. By supporting the immune system, helping to lower cholesterol and potentially protecting against cancer.

A bowl of porridge contains more soluble fibre than a slice of wholegrain bread. It is also low in fat, virtually sugar-free and a rich source of minerals. This includes manganese, copper, iron and B vitamins.

A 14 year study from Harvard University suggests that eating oats is more likely to protect you from various illnesses such as heart diseases. Some researchers even claim they may increase life expectancy.

Studies have found that eating 3g of beta glucan a day (about a 70g bowl of oats) can reduce your levels of harmful LDL cholesterol by around seven per cent.

Traditional porridge oats are low GI, creating a slow release of energy into the bloodstream. They also provide a small release of insulin, so as to prevent blood sugar spikes.

While porridge is a healthy breakfast compared to many sugar filled cereals, you should still be careful what you choose to add to it. Eating too much of anything can turn the benefits on its head.

It’s recommended to eat a reasonable portion of porridge and avoid adding any sweeteners such as sugar or honey as this can turn the healthy breakfast into a sweet treat.

Instant porridge oats are not ideal as they tend to be higher on the GI index due to the refining process they go through to make them cook quicker and easier to eat.

To make your porridge even healthier, consider making your breakfast with Sprouted Organic Oats. Sprouted Oats are nutrient-dense and have a fuller oats flavour that is easier for the body to digest. This makes them super healthy and delicious for porridge.

Sprouted Oats also taste great in a smoothie, snack, and can be enjoyed any time of the day including lunch or dinner.

Iodine info – No drop in Chernobyl cancer risk: US study

The Story About The ‘Miracle Enzyme’ is Spreading Rapidly